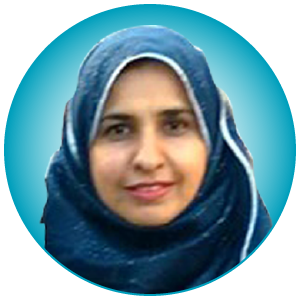 Dr. Shazia Abdullah is a UK trained rheumatologist working at Sheikh Khalifa Medical City in Abu Dhabi as a consultant in Rheumatology.

Dr Abdullah underwent her general medical training in the Yorkshire Deanery in UK and completed her MRCP from the Royal College of Physicians of London, UK in 2001. Following that she entered the specialist rheumatology training program in the Health Education North East, England. She obtained her CCT in rheumatology in 2009 and then successfully completed a Masters in rheumatology from King’s College, London in 2010 with a distinction/merit. After obtaining her CCT, she moved to Cambridge, UK where she worked as a consultant in rheumatology for 8 years before relocating to UAE.

As a consultant in rheumatology, she was the chair of the rheumatology service for 3 years and established the early inflammatory arthritis pathway which was ranked as one of the top services in UK on the BSR audit.

She has an ongoing interest in teaching and has received formal training in teaching from the University of Cambridge. She is an Associate Lecturer of the Higher Academy of England. She was the lead of the undergraduate training programme (medicine) for medical students at her Trust. At a post graduate level, she was the training Lead for Musculoskeletal Primary Care physician. She has been an examiner for Cambridge medical school, UK and has been worked in various teaching roles, affiliated with the University of Cambridge.

She is a member of the British Society of Rheumatology and holds a Fellowship with the Royal College of Physicians.
Dr Abdullah is an excellent national and international speaker, her research interests are inflammatory arthritis and she has published in peer reviewed journals.